Throughout time, architecture [1] and music [2] have found an intimate inspiration and direction in each other, seeking beauty, structure and unity in the ways that the other is composed, drawn, written, heard and built. As architecture is often understood as the purest of the spatial arts, so is music often referred to as the purest of the temporal arts (cite) and together these two fields have developed intimate integrated relationships with each other. During heightened times of cultural advancement, architectural and musical works have integrated each other, creating some of humanities most celebrated works. Works that intimately fuse these two disciplines are called Archimusic.

The term archimusic was coined by Marcos Novak (Novak) and is defined as “the conflation of the science and art of architecture and music…this is a place where buildings can flow and music can be inhabited.” When this is understood, the distinction between architecture and music can be set aside.” Archimusical works use, embed or in some other way informs an element of its own composition or process with an attribute or characteristic from the other discipline for example, a work of music that is in informed by an architectural work, or the opposite; an architectural work that is informed by a musical work.

These ancient relationships between architecture and music were associational[3] in nature, where architectural and musical works were both created by means of another modality usually mathematic or geometric, which both fields found reason and inspiration in. During the Renaissance, works constructed and composed began to evolve these associational relationships into translational[4] relationships by taking a piece of music or a work of architecture and translating it into the other. For example, by interpreting a drawing of a building as a musical score or the harmonic ratios of a musical work as the proportions of a buildings mass.

During the modern period of the mid 20th century these translational relationships evolved to become transformational[5] integrations. This was done by using methods and practices found in one modality, and integrating them into its own generation. For example, an architectural form could be interpreted as a musical motif; this motif could be translated into a new musical form, which could be translated back into an architectural form. The Greek architect and composer Iannis Xenakis is one of the founders of archimusic and many of his works represent the most important examples of transformational integrations. 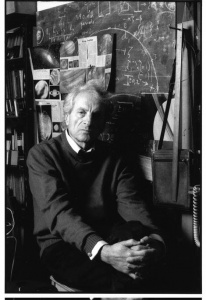 One of the first significant steps forward can be seen in the Philips Pavilion built in 1958 while working with Le Corbusier. Here Xenakis transformed the glissandi lines found in bars 309-314 of the graphic score of Metastasis (1954) into the ruled surfaces of the nine concrete hyperbolic parabolas of the pavilion for the Dutch Philips Corporation at the 1958 Worlds Fair in Brussels. 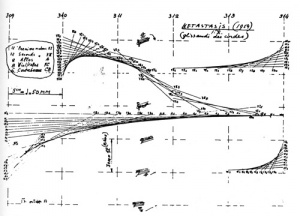 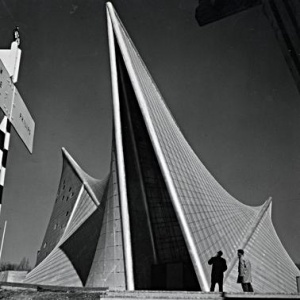 Over the next 20 years Xenakis would provide another significant progression in the interdisciplinary search with the development of the Polytopes (many + places/site), a series of four archimusical spectacles that inhabited different sites and displayed a new kind of audio/visual spatial composition using the materials of sound and light. 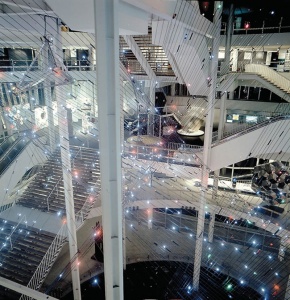 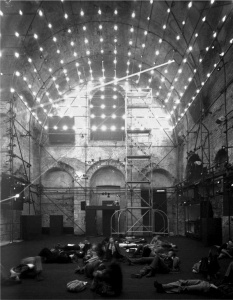 In 1978, Xenakis exhibited the Diatope at the opening of the Centre du Pompidou in Paris and in doing so bookended this 20-year morphological exploration. His proposal for the Cite de la Music with Jean-Louis Véret at the Parc de la Villette in Paris may have offered another evolution, but was never realized due to having lost the competition to the architect and now Pritzker Prize winner Christian de Portzamparc. 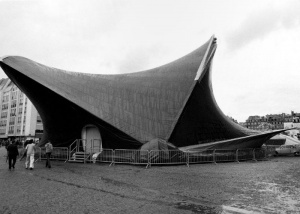 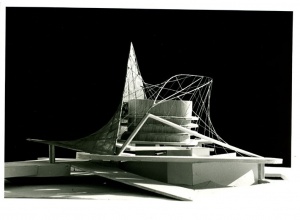 Throughout the last few decades, certainly since Xenakis’ Diatope in 1978 or perhaps the conceptual design proposal for the Cite de la Music in 1984 there has been little advancement to these methods posited by Xenakis. Contemporary examples have continued to explore this interdisciplinary domain though the results have not yielded the same kind of impact and influence capable of moving the discipline forward. 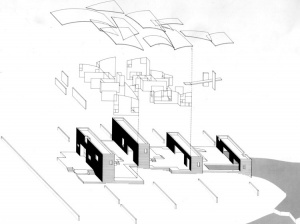 More recently, while contemporary science and technology have progressed through mathematical, computational and informational processes, contemporary architecture has also progressed through the methods of interfacing with these advancing technological concepts. This has proved beneficial in the ability to fabricate complex geometries, develop parametric building systems and building information models (BIM) and build upon quantitative models within the architectural discipline.

While these quantitative advancements have been made and brought with them achievement concerned with efficiently and economic streamlining, it has come at a qualitative cost to the social, public and common good for which architecture is responsible. This is due in part to losing its valuable connections to the arts and humanities particularly the field of music and the relationship of how events and structures unfold through time and the instrumentation that allows the control of forms and notational characteristics that define the process. A consequence of this can be seen in the standardization of architectural form, the simplification of building program, and the lack of interest in contextual material applications common throughout the majority of built structures.

Marcos Novak articulates this situation in this essay The Music of Architecture stating, “Architecture is orchestrated of materials in rhythmic arrangements proportions melodically. Like a rich sound a space has a wealth of overtones from both material and ornamentation and added by time of patina. “Most of what we build today is like pure sine tones, correct but impoverished understanding. The timbral dimension of architecture in cyberspace may help to recover that richness to our barren real world environments”. (Novak) Novak continues by saying “Composers even if they have no formal architectural truing create spaces with a sophistication of concerns that architects often forget.” It is here that we find ourselves; in a field with a wealth of historical content that has more or less remained static for the 30 years since Xenakis’ significant contributions. How do we pick up where Xenakis left off and contribute a new transformational method that is able to push the discipline forward and allowing for new work to be able to be generated?

In the continued development of archimusic we seek to progress the ideas put forward by the 20th century architect, composer Iannis Xenakis. His development of work at the intersection between the fields of architecture and music surpassed a legacy of previous attempts that relied on associational and translational techniques and advanced this interdisciplinary practice using transformational methods. This developed field of “archimusic” has grown out of Xenakis’ multimodal practice of “transfers” and his application of a “general morphology” and his ability to apply mental constructs to both technology as seen in the UPIC, and philosophy as seen in many if not most of his architectural and musical compositions. This synthesis allowed Xenakis to explore and develop new musical, spatial and formal compositions.

This research continues this development by investigating questions relating to the generative and evaluative relationships between architecture and music using contemporary computational methods with the goal of illustrating significant new influences and applications that music has to the computational architectural design process and paving new ground for how these two arts may continue to inspire each-other.

Marcos Novak’s concept of Archimusic has two phases. The first is Archimusic within Information; this is the virtualization of the architecture and music of the actual world that we are all familiar with. This can be seen in the current explorations of virtual reality gaming environments and common cinematic themes. The second, Archimusic of Information is how these relationships are to be developed and composed out of their own raw materials and forces. As Novak states, “If archimusic within information corresponds to the familiar architecture and music of the actual world, then the archimusic of information is the virtual analog to thunder, the sea roar, or birdsong… “Archimusic is to visualization as knowledge is to information”. Visualization is “within” information as Archimusic is “of” knowledge.

These two ideas have extended the awareness of cross-disciplinary design between architecture and music, and while the first is what we might consider to be commonplace in the currently computational world that we are all a part, this research will be concerned more-so with the later, the Archimusic of Information, and will continue to extend this concept into new and unexplored territory by developing methods and models by which to understand (knowledge) and design (make) with.

Though their modalities have changed and evolved due to the technological advancements and achievements of the times, the arts of architecture and music have sustained as principle parts of all cultures. Architecture and music have illustrated the heights of cultural achievement and can act as indicators of when certain societies have been at heightened time of development and what areas of that culture where viewed as the most important. It is for this reason that I have focused the periods of historical overview to the ancient, renaissance, modern and contemporary. These four examined periods are from a western perceptive for the purposes of this research. That being said, it would be an interesting undertaking to consider how eastern and middle-eastern cultures have explored similar concepts, for they too have a rich and intersecting history of both architecture and music.

A few definitions need to be given in order to understand the foundation of this research. These terms will be used often and describe the relationships:

As we proceed the conversation will be concerning itself with different types of relationships and integrations. In general these terms will be used to define two types of connections between the disciplines of architecture and music.

These relationships and integrations will be used to illustrate and understand how the different modalities of architecture and music are being connected. These modalities will be representational and actual (physical) concerned with methods of notation and instrumentation respectively.

There are different methods of integration that will be discussed. These represent that manner of connection between the architectural and musical modalities.

As a general heuristic these relationships, integrations and interactions follow a certain connection pattern. Exceptions exist and in some instances the connection is multidirectional or even fed-back on itself, but generally the following diagram holds true.

[1] Architecture is the commonly defined as the building of structure made for inhabitation. In this research we are using the term architecture to mean the composing of elements into relationships either physical or virtual in the spatial domain. It is important to note that the phase “Architecture exceeds building “ by Marcos Novak is fully applied here.

[2] Music is commonly defined as the organization of sounds into relationships with emotional effect, but as with the above-mentioned definition of architecture it is important to note that the phase “Music exceeds sound as architecture exceeds building “ by Marcos Novak is applied in this research.

[3] Associational integrations are a connection or cooperative link that unites two separate entities with a common purpose.

[4] Translational integration is the conversion of one form or medium into another by communication of the meaning of a source-form/field by means of an equivalent target language.

[5] Translational integration is the conversion of one form or medium into another by communication of the meaning of a source-form/field by means of an equivalent target language. 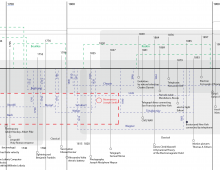 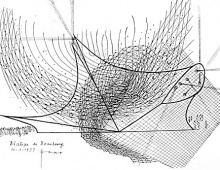 Historical Survey of the Field